Alfred was born in 1895 in East Worlington, the 3rd son and 5th child of Henry and Lucy Hitchcock of Pedlars Cottage.

By 1911 Alfred was living in and working as a horseman for Samuel Hosegood of Cuddenhay, West Worlington. He was 16 years old.

Alfred enlisted in Exeter and the 8th and 9th Battalions of the Devonshire’s were engaged in fierce fighting at Mametz on the first day of what was to become known as the Battle of the Somme.

This area was held by German troops until 1st July 1916 when Alfred’s Battalion were fighting in Mansel Wood. At the end of the day 141 men had been killed, 55 were missing believed killed and 267 were wounded.

Alfred died alongside Lt William Noel Hodgson, soldier and poet. A total of 153 men were buried in the trench where they fell, a special service was said and someone raised a wooden cross with the words:

Alfred is buried in Grave B3, he was 21 years old.

It was at Mametz that the war poet Siegfried Sassoon, of the Royal Welch Fusiliers, made a single handed attack on the enemy trenches on 4 July 1916, as recorded in his memoirs. 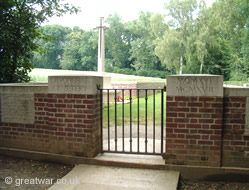 The Welsh poet Owen Sheers wrote a poem in 2005 to commemorate the battle in his Skirrid Hill collection:

This morning, twenty men buried in one long grave,
a broken mosaic of bone linked arm in arm,
their skeletons paused mid dance-macabre.

At the end of the first day of the Battle of the Somme over 160 of men of the 9th and 8th Devonshire Regiment were retrieved from where they had fallen in action in No-Mans-Land and the German positions. They were carried back to the British Front Line trench position for the start of the day, and were buried in a section of this trench near a small wood called Mansell Copse.

Two days before going into action on 1st July 1916 with the 9th Devons, Lieutenant William Noel Hodgson wrote a poem called “Before Action”. It makes very poignant reading as Lieutenant Hodgson did not survive to see the end of the day. He was killed aged 23 and was one of the Devons’ bodies brought in that night from where he fell in action. 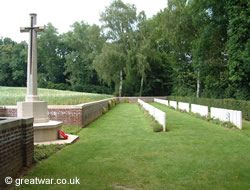 By all the glories of the day
And the cool evening’s benison
By that last sunset touch that lay
Upon the hills when day was done,
By beauty lavishly outpoured
And blessings carelessly received,
By all the days that I have lived
Make me a soldier, Lord.

By all of all man’s hopes and fears
And all the wonders poets sing,
The laughter of unclouded years,
And every sad and lovely thing;
By the romantic ages stored
With high endeavour that was his,
By all his mad catastrophes
Make me a man, O Lord.

I, that on my familiar hill
Saw with uncomprehending eyes
A hundred of thy sunsets spill
Their fresh and sanguine sacrifice,
Ere the sun swings his noonday sword
Must say good-bye to all of this; –
By all delights that I shall miss,
Help me to die, O Lord. 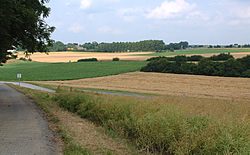 Lieutenant Noel Hodgson and the men of 9th Devons were to attack the German Front Line at Mametz from thsi position on the British Front Line on 1st July 1916.

Inspiration for the Poem “Before Action” 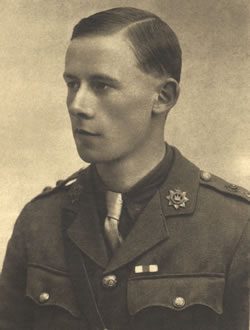 Lieutenant Noel Hodgson, MC served with the 9th Battalion the Devonshire Regiment and was on the Somme battlefield in
June 1916 preparing for the Battle of the Somme.

The scheduled date for the start of the battle was originally to be August 1916, but had been brought forward to the 29th June, 1916.

Owing to bad weather in the week building up to the battle the date of the attack was postponed at 11.00 hours on 28th June and moved by two days to the morning of 1st July 1916.

It is believed that Noel Hodgson wrote the poem “Before Action” on 29th June.

In the early hours of the morning of Saturday 1st July 1916 William Noel Hodgson was in position with his comrades, anxiously waiting for Zero Hour at 07.30 hours.

At Zero Hour the men of 9th Devons advanced from their position behind the Front Line trench, with the 2nd Battalion Border Regiment on their left and the 2ndBattalion the Gordon Highlanders on their right.

The 9th Devons had about 400 yards of No-Mans-Land to cross in the Carnoy valley before they could attempt to break into the German Front Line south of Mametz village. As soon as the first men of the Devons reached No-Mans-Land they were exposed to fire from German machine guns. Many were cut down in No-Mans-Land and the battalion suffered heavy casualties.

Lieutenant Hodgson was Bombing Officer in the attack. He was responsible for keeping the men supplied with grenades during the attack, which would be especially important if they got into the German positions. Within an hour of the attack it is said that Lieutanant Hodgson was killed. He was aged 23. He would never again see a sunset.

In spite of the heavy casualties lost by the battalion the Devons had progressed with their attack and the German-held village of Mametz was captured by the British 7th Division. All but one of the officers of the 9th Devons were killed or wounded. The British Front Line position did, therefore, successfully advance to a new position by the end of the day. 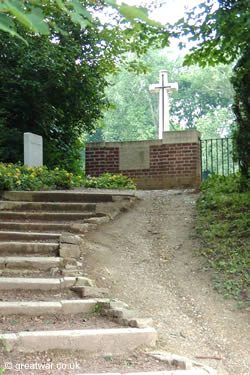 A ceremony was held at the burial site on 4th July. A wooden cross was put up at the time by the survivors of the 9th and 8th Battalions of the Devonshire Regiment. Carved on the cross were the words: “The Devonshires held this trench, the Devonshires hold it still.” The graves were left in this position when the cemeteries were rebuilt after the war. 163 graves are now contained in the cemetery which is named “Devonshire Cemetery”.

All but one of the casualties are men of the Devonshire Regiment. Lieutenant Noel Hodgson is buried in Grave reference A. 3. 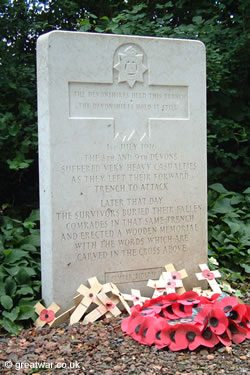 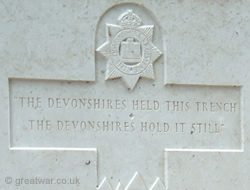 In the 1980s Lieutenant-Colonel Graham Parker was leading a tour of British Army soldiers and officers to the Somme battlefields, some of whom were officers from the Devonshire Regiment.

He told them the story of the wooden cross with its famous motto, and that it was presumed that it had been stolen as it had disappeared after remaining at the entrance to the cemetery for many years after the First World War. The Devonshire Regiment officers decided to do something about this and immediately they returned home they started a collection to pay for a permanent monument to be put in the place of the missing cross.

The stone memorial which now stands at the entrance to the cemetery was placed there soon after.