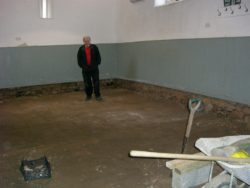 On Sunday 18th October 2015 some members of the Heritage project group investigated the parish hall floor now exposed after removing the wooden floor and joists . With only one day available before the builders started their work the group took on the role of keen amateur archaeologists to gather as much information as possible about the floor before it was sealed by a layer of concrete. 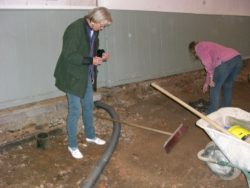 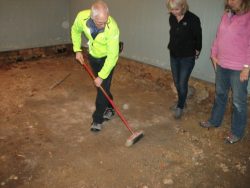 The team initially made a general search of the floor looking for objects and studied the exposed areas of the walls to get a feel for their construction.

After collecting various loose objects the team swept dust and rubble from the southern end of the hall to expose what was thought to be the original floor.

A separate page shows a slide show of The Volunteers Inspecting the floor.

The walls are cob on top of a stone plinth. The stone appeared to be lime mortared from typically about 30cm above ground but dry laid at the base. The lack of mortar at low level may be due to erosion arising from hall flooding in the 1960s (see note here).

The walls had four air vents at ground level:

The floor in the south end of the barn from wall to doors is  natural local clay soil that has been leveled and compacted ether through general usage or (more likely) beaten to form a solid surface such as those in Traditional Threshing Floors. It’s possible lime powder was added to the floor to harden the surface. There were signs of two parallel depressions running between the doors in the east and west walls which were almost certainly the impressions of wheels on carts that would have been driven through the doors when the hall was used as a tithe barn or storage barn.

The walls to the north of the doors showed clear signs that the original floor sloped up from the level south end by about 0.75m. It seems likely that when the building was converted to its current use as a parish hall the floor was dug out to about 1.25m from the north wall to accommodate the wooden floor in the main hall area, and the hall stage was built over the remaining higher area. The line of the old floor surface would be approximately the same as the metal ramps shown in the image to the right. A separate page shows a slide show of images of the Earthen Floor and Hall Walls.

Strewn over the exposed floor were a number of small items including around a dozen ping pong balls, several small animal bones and a few odds and ends including rusted metal objects. A gallery of the finds is available on this page. A separate page shows a slide show of the Hall Floor Finds.