The Anglican church of St Mary’s, West Worlington has a long history.  The tower and chancel dates from the 13th and 14th centuries.  Much of the church, however, is predominately fifteenth century.

The spire was restored after a lightning strike in 1976, but retains some of its early structure.

The church underwent another major repair programme in 2011 to restore the floor and interior panelling.  At the same time the bells were refurbished and are now rung on a regular basis. 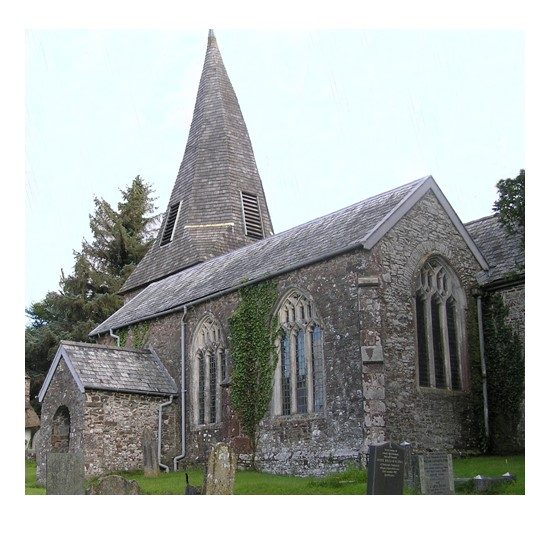 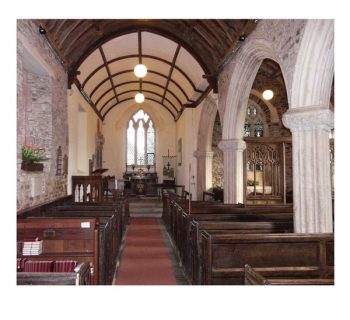 St Mary’s is a stone church, consisting of chancel, nave, south porch and a western tower complete with wooden spire.  Built mainly of stone rubble, but also some Bathstone dressings, with a slate roof.  St Mary’s was built in the gothic perpendicular style, which was a common design for churches in the 15th century in Devon, and is so-called because of the emphasis on vertical lines.

The spire (possibly rebuilt in the 17th century), has a slight twist, making it look not a little like a slightly crumpled wizard’s hat.  It is covered in oak shingles and supports a peal of six bells.

Inside the church a splendid feature is the wagon (also known as a barrel) roof, which runs the full length of the church (apart from the chancel).  The roof boasts beautifully carved ribs and decorated bosses.

The pulpit, lectern, altar rails and altar table are all mid-late 19th Century and are in the High Victorian Gothic style popular at the time.

Things to look out for

There are so many lovely features to this church it is difficult to pick just a few but you must check out the roof bosses and see if you can spot this delightful one near the south door.

While looking up don’t miss the intricate decorative leaf frieze covering the wallplate.

The ends of the benches have intricate and individual carvings that probably date from the 16th century and note that no two are alike.

On each side of the chancel is a memorial plaque dedicated to the Stucley family; this one is dated 1663 and with its flanking Corinthian columns is quite a feature.

While in the chancel take a moment to admire the Victorian Gothic encaustic floor tiles.

Behind a beautiful row of Devon thatched cottages, St Mary’s church is hidden away in the centre of West Worlington.  Travelling by car it would be easy to miss that West Worlington has a church at all.  The giveaway is the Church noticeboard on the roadside at the end of the cobbled path leading you through Church Cottage into the church yard.  OS Grid Ref: SS 769 134