The earliest records known as Glebe Terriers provide evidence of the date range that the barn was constructed. The document of 1679 indicates a barn built with mud walls and therefore indicates the barn was built before that date.

The outhouses are a barn consisting of five bays, a sheeping (shippon) of three bays and a stable of two bays all having mud walls and thatch covering…

There has been much speculation by local people, historian and archaeologist as to whether the building was built and used as a tithe barn or as a threshing barn. No conclusive evidence has been discovered to confirm it was one or the other, however it is possible to speculate that like many such barns in small rural communities in Devon it had both uses.

A tithe barn was a type of barn for storing rents and tithes — one tenth of a farm’s produce which was given to the Church. Tithe barns were usually associated with the village church or rectory and independent farmers took their tithes there.

A threshing barn can be recognised by its great doors – two opposite each other large enough for a fully-laden wagon to pass
through. In between the doors lies the threshing floor, taking advantage of the through draft.

East Worlington Kalendar of Quotidian Quotations published by Rev. H. A. Hill in 1910 describes the barn in a similar way to the earlier documents thereby confirming it is the same building. By 1910 the building was being used as Parish Rooms, which indicates an earlier date for use for the purpose. During this period the building was still owned by the church. 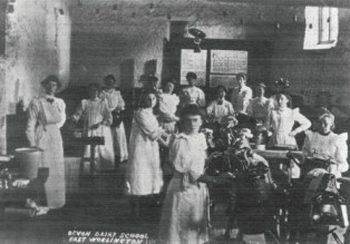 Around the 20th Century and well into the Edwardian period Devon supported a travelling Dairy School to provide education, mainly for girls, in the skills associated with producing dairy products. Devon Dairy school visited East Worlington and while it is impossible to confirm an exact date, the photographic evidence supports its presence in the Parish Hall.

From Barn to Parish Hall 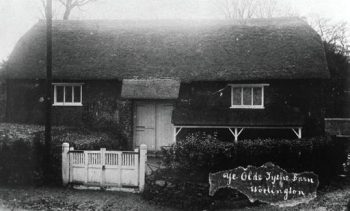 ‘‘The meeting in the ‘Old Tithe barn’ to consider what steps should be taken by the parish to provide a suitable War Memorial was well attended. …………. it was decided that a public memorial of some description should record the names of those who had fallen in the war, ……………….

The idea which seemed to find most favour among the audience was the provision of a Memorial Hall, which should be the absolute property of the parish, and in which all kinds of entertainment and meetings could be held. The Rector then explained that in all probability the Old Tithe Barn would be put up for auction in the near future, or failing a purchaser would be demolished.

It now rests with the Committee to decide whether or not they shall purchase the old building and renovate it. There is no doubt that the expenditure of, say, £100 or £150 would provide a very fine room as a Memorial Hall, at a fraction of the cost of erecting an entirely new building. Amid much enthusiasm Mr Stucley announced that he would start the ball rolling with a donation of £50.’’

Building of the Foyer and Toilets 1970 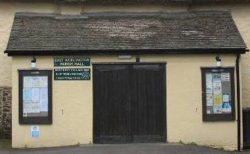 The Committee started to discuss the need for toilets in 1964. The minute book entry of 18.03.68 states:

‘‘A new quotation for work on the hall was read out the figure being £816.4.0. As this was nearly £100 higher than the original it was decided that the secretary should write asking if it was not possible to reduce their new figure. A starting date as near as possible to June 1st was to be requested’’

and clearly the work was completed by 1970 when the minute states:

A programme of conservation work to restore the 17 th Century Parish Hall was undertaken and completed in celebration of the Millennium 2000AD. The work included the removal of all cementations plaster and render on all walls both externally and internally and to re-plaster and re-render using traditional building materials applied by traditional techniques. All stonework was repointed with lime mortar.

Other improvements including the uncovering of a previously concealed window, the updating of an old and shabby kitchen, the refurbishment of the ancient leaded lights, a new and updated electrical and heating system and installation of a disability ramp.

Periodic Renewal of the Thatch 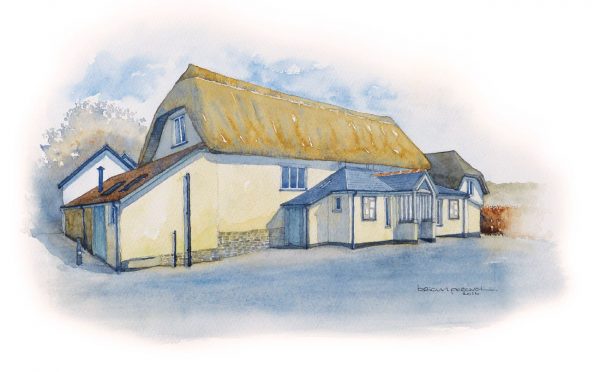