You are here: Home > Home > Community Heritage > Stories of the Community > My Childhood in West Worlington

I was born in 1931 and lived in Town Cottage with my brothers Francis and Dennis. My earliest memory is of a five year old, being sent to sit in the garden while my brother Denis was born. Denis was always known as Toby. Toby was the name of the donkey up the road, I liked the donkey and the name stuck. 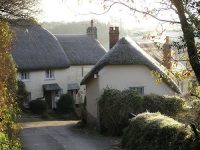 We lived at Middle Church Cottage where I would watch my father digging the graves (although I was not suppose to) we also lived at Hensley Cottage. 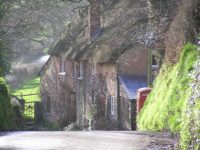 If we needed to make a phone call we would go to Miss Boundy’s,  it cost threepence, I was always very amused as an eight year old to see her speedily turning the handle ready for a call, and it still makes me smile today. Calls were usually for a taxi to take us to Witheridge, to the doctors. Ted Osborne of the Stuckly Arms would take us there, wait for us and return us home for three shillings.

Aged eleven I went to Tiverton Grammer School, I would cadge a lift on a Monday morning with the butcher who took me to Witheridge, where I caught a bus to Tiverton. I lodged in Tiverton during the week before catching the bus back to Witheridge, and walking home. Eventually I got a push bike which I would leave during the week at the back of The Angel, when I came back on a Friday it would nearly always have a puncture, (who was riding my bike?)

I also remember that if you reported to a farmer that his livestock had got out of the field you would be rewarded with £10.

I really liked double summertime when it was light until eleven in the evening.

I can trace my family back to 1775 when William Lee was born; William married Mary Parish in 1803.

The village was a lovely place to grow up in.